It’s not a problem to make mistakes, everyone does, but it is a problem if you don’t learn from them.

This past Friday I realized that I had made a hugely, terrible epic mistake. I had done my weekly haul at Costco (that little piece of heaven on earth where I buy all my fresh produce and super healthy items because we eat those types of things in epic proportions at my house and I would have to go to store and spend $5,678 a day if I went to an average grocery store) and I had returned home, unloaded it all, and realized I had forgotten to purchase my Chobani yogurts. This my friends was a failure of “IRS tracking tea partyer” size. Even on sale, the cheapest you can find Chobani at the local grocery store is $1.00 per container, but at Costco, even when it is not on sale and doesn’t have a coupon it only averages out to about $.85 a container. My body basically lives and thrives on that protein infused goodness, so I had to make a second trip to Costco that week where I bought not one box of 15 yogurts, but 2 to be safe. I am so lucky that I outsmarted myself on that second trip. Epic fail to Epic win in the matter of 48 hours!

My Tweet: Costco twice in one week because I forgot my @Chobani Bought 2 boxes to play it safe. #addict #healthyhabits #health

That second trip to Costco reminded me of another major failure I have had that also involves Costco and that is the failure to grocery shop without a fully staffed nanny firm as my entourage. My boys adore Costco and all of their glorious samples and friendly staff members. I do try to go though when I only have one boy with me instead of both, or if I have the hubby for back up. On one such trip all bets were off. I was getting into the fridge to pull out some milk and I heard a lady behind me snap at me for my kids. I turned around to see what her deal was and saw my kids climbing in the freezers and having a dance party. I definitely was mortified, however, I thought the lady was totally nasty in the way she dealt with it. Nobody was injured. Nobody died. Nobody was bothered by the incident except the lady who woke up on the wrong side of the bed. Other customers got a chuckle. I was embarrassed, but what parent has gone their entire parenting career without one grocery store fiasco? I doubt there is even one on this planet. I guess you learn really quickly that turning your back for even 2.2 seconds can be an epic failure.

Another epic failure that many women in general make is looking to romance movies to find out how to navigate real, committed, long-term relationships. A single friend of mine texted me this weekend that they were watching “Notting Hill” and crying. I texted this friend back and told him the truth. I said:

After 12 years of marriage the line “I’m just a girl standing in front of a boy asking him to love her.” (So sweet and sappy )

Becomes: “I’m just a girl standing in front of a boy asking him to fold laundry.”

I then had to send the obligatory LOL on the text because truth be told my marriage is still sweet, sappy, and easy to navigate 87.56% of the time. I’m blessed!

On my 8 mile run this morning my Garmin did not work at all until after mile 1. There was extreme heavy cloud cover, so I don’t know if that contributed or not. I passed what I knew to be the 1 mile mark at minute 9 and it was saying I had only gone .2 miles. Needless to say, I stopped the watch, got a new signal, and then took off on my run happy spree. It was a great run once I resolved my technical issues. One day I’ll learn to run “naked” and just let myself go without being married to my GPS watch. I’m totally addicted to it though. I love seeing the results of my time per mile, my overall distance, and my calorie burn. I would hate to have even .1 of my run not count on my chart. I will be sharing yearly mileage goals with you very soon.

Participating in an ugly sweater contest and allowing yourself to be inserted into photographic evidence as such. Disclaimer: My husband won, but I bought him the shirt so I should get at least 2nd place right? 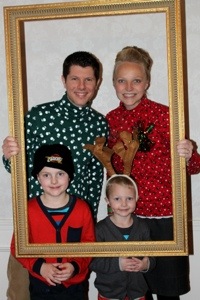 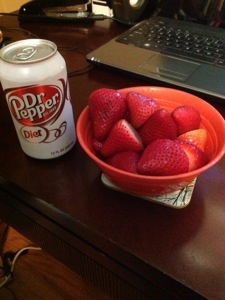 So Diet Dr. Pepper might not be a superfood, but you can’t be perfect all the time and it’s supergood. That makes this snack just a 50% fail but a 100% taste bud dance party. 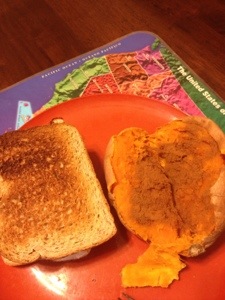 The perfect lunch. A Baked Sweet Potato with cinnamon and an egg sandwich served up all classy like on my finest plates and table decor.

What epic mistake have you made this week?

Musings about mind, body, and spirit

A follower of Christ. A devoted wife. A mother of 2 energetic, silly, handsome, intelligent boys. A daughter, sister, friend. An avid runner since 2011 (couldn't run even one mile before that), half marathoner, marathoner, and wanna be endurance athlete. A student of life. A lover of human beings. Passionate about helping, serving, and growing people physically, spiritually, and emotionally. A weight loss and maintenance success story (60 pounds plus off in 2010 never to be seen again.) An entrepreneur. A church planter.Public speaker and communicator. An avid reader. Life long learner in pursuit of God's highest and best.