The discomfort of giving your best is less than the regret of holding back.

A lot has been going on in my life lately. My weekend started off with one of those days of sorrow topped with joy. We spent the day in Toledo Ohio at the Memorial Service of my 90 year old Great Aunt Dorothy. It is very sad to see her pass and know that her chuckle and ability to include everyone in everything and make you feel genuinely liked will never be felt again, but  celebration of a life well lived. To live to 90 years old and have spent 89 of those years living independently is a great story. She only gave up her independence 9 months before her passing due to some health issues. I am keeping my fingers crossed that I got that side of the families genetics instead of my Bentley side of the family, but so far I’m pretty much striking out since almost all of me is pure Bentley. If I keep running and living well though, hopefully that DNA will kick in and I will last well into my 90’s like so many of the Whitmore’s have. 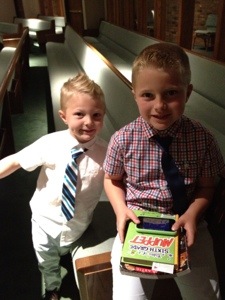 The boys at the memorial service behaving like champs and brightening the mood. 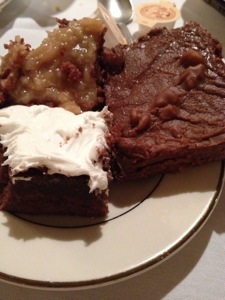 A small portion of the dessert table that I had to try. It was National Doughnut Day Friday, so I replaced the biblical mandate of eating Donuts on that holiday with a mandate to eat all chocolate products in sight. I had gotten out of bed at 5 AM that morning to get a 6 mile run in before we left for out of town, so I definitely had banked the calories for this.

On Saturday I woke up early again to hit all the Little League Games and get my house in acceptable condition for our friend who was coming to spend the weekend with us and minister at our church. I got my 8 mile run in and felt fantastic. Our rule at the Buckland home is that when friends come in from out of town we have to eat copious amounts of food in our quest to be hospitable, and all of the food must be delicious. By the time our friend arrived, I was more than ready for dinner, but something felt off. I decided to order a salad instead of the burger I usually order at Fat Head’s (the restaurant my husband thinks is necessary for each of his friends to eat at. He thinks eating here is as important as baptism, so you can’t argue with that). I ate my salad and just felt inordinately full.

I woke up Sunday feeling lethargic, but since I had slept all of 3 hours the previous night, didn’t think much of it. I did my Sunday #runstreak 2 mile run, had a great church service, then went to another horrible for your body meal. As I’ve mentioned in previous posts, you have to eat at MELT when you visit Cleveland. It was Jonathan’s duty of brotherly kindness to expose our friend to this place. I didn’t feel great at this point, but ate my meal and half of everybody else’s meal anyway because it’s just what you do at MELT and I thought I was just tired.

That evening I ate nothing at all. I even said “No” to ice cream when the guys tried to peer pressure me into partaking again. I just felt chilled, tired, stuffed, and not too great. I honestly thought it was from eating too much. I almost always gain like 67 pounds when our friends come to visit and I know how unhealthy eating destroys my body and my system, so I thought I am officially too old to indulge occasionally and it’s time to marry my new lifestyle 100% of the time instead of following my usual 80/20 plan.

Thankfully, or horrifically depending on your perspective, I have learned over the course of the last few days that it wasn’t what I was eating that is the problem, but in fact, my body decided to go on the WORSE DIET EVER. I got up Monday and almost passed out walking to my kitchen to start coffee.  This is obviously not normal behavior. I can run a marathon but I can’t walk to the kitchen, funny stuff. I felt so hot and so cold at the same time that I thought I was going to burst. I crawled back up to my room and just layed like a kid in bed. When I can’t make or drink coffee, it’s time to call the coroner. I was down for the count.

Because Jonathan had appointments that day, I pulled myself up, threw clothes on and took Gentry to safety town. I had already promised Reese that we would go to the YMCA for me to work out and him to have kids club, so despite my husbands plea’s, I took off. 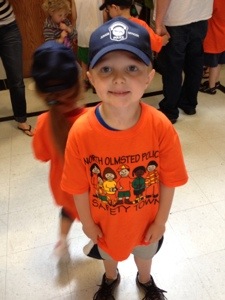 After 576 Days on the RunStreak I’m committed to the streak. I eeked out my 5K on the treadmill feeling like I was going to die and then skipped weight training. At that point, there was no arguing, something bad was happening. I will not tell you the other evidence of the stomach flu in my life at that moment, but let’s just say I had a very unpleasant day. I went home, showered, and didn’t move all day. At this point I had not eaten one thing since Sunday at lunch and was not only not hungry, but terrified of what would happen if I ate. I finally force fed myself a banana and some Sprite, but I had a fever of 101 and couldn’t budge.

So, if you want to lose weight fast, find someone with the stomach flu and get it really good. It is Wednesday and I’m still not recovered. My fever has broken thankfully, and I’ve eaten some chicken noodle soup and toast, but i have no appetite and my energy is nill. I am down 5 pounds from Sunday morning. I hate being sick, but if I can keep it off when I feel better and start eating again, that will be nice.

I have kept the #runstreak alive against all common sense and logic, but I have had to replace my 10 mile run this week and my 8 mile run with 2 mile slow runs and I pretty much have read that you shouldn’t resume any mileage until you can eat normally and feel strong. For now, I guess the only speed work that will be happening is a trip to the bathroom.

What are your lose weight quick tips?

When was the last time you were bed ridden? (The last time I was this sick was before my eldest son was born and he is 8 now, so I have a great track record for health and wellness overall.)

Did you celebrate National Donut Day?

Musings about mind, body, and spirit

A follower of Christ. A devoted wife. A mother of 2 energetic, silly, handsome, intelligent boys. A daughter, sister, friend. An avid runner since 2011 (couldn't run even one mile before that), half marathoner, marathoner, and wanna be endurance athlete. A student of life. A lover of human beings. Passionate about helping, serving, and growing people physically, spiritually, and emotionally. A weight loss and maintenance success story (60 pounds plus off in 2010 never to be seen again.) An entrepreneur. A church planter.Public speaker and communicator. An avid reader. Life long learner in pursuit of God's highest and best.